Whatever happens in Vegas, stays in Vegas...

Got back to Chennai on early morning of May 1st, from a place that has so much of history attached to it - Las Vegas.

Never realized that Vegas, a place known for its glamor, gaming and style, dated back to early 1700's. This was the second time I've been in Vegas in the past 5 months. Being a tetotaller and a big 'zero' at gambling, I was not as much thrilled as others would be, during this second visit. I was there for a conference, and it was my first conference as a speaker. With butterflies in my stomach, it was a different experience to be in a place like "Vegas for a technical conference"!

The second day was over, and it was when I happened to know from my friend that Las Vegas had a good history attached to it. It is when I began to realize that Nevada (the state to which Las Vegas belongs to) was a desert! This got me curious and started to browse the internet to learn more about Las Vegas. 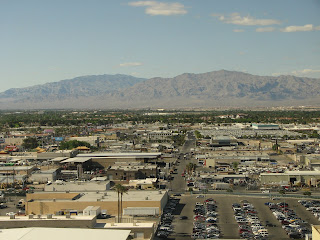 "Las Vegas" means "The Meadows" in Spanish, discovered by a Spanish trader Rafael Rivera in the 1700's. Its told that the construction of the Hoover Dam (originally known as the Boulder Dam) resulted in the generation of so much of electric power, that Las Vegas started to consume and started to develop as the most brightly lit city in the world.

"The Strip" is a stretch in Las Vegas which houses some of the world's largest and glamorous casinos like MGM Grand, Paris, New York New York, etc. Its said that "The Strip" does not belong to Las Vegas, but to Clark County. The Strip-building began in the late 90's and ever since then, its been the gaming capital of the world.

"Whatever happens in Vegas, stays in Vegas"....this is how the famous one liner goes. But "Whatever has happened (the history) at Vegas needs to get out of Vegas" :-) . To know more about Vegas, here is a good link LasVegasPast.com
Posted by Unknown

Email ThisBlogThis!Share to TwitterShare to FacebookShare to Pinterest
Labels: Travel