City Travel in India - It all starts at your doorstep!

It all starts with the first step into the busy streets of India. The busy roads of India is something that every non-Indian resident gapes at. About three months back I had a bunch of colleagues from the US visiting the Bangalore office. It was during lunch that I suggested to eat out at Pizza Hut which was quiet close - diagonally opporsite to the road. So, we decided to walk down to this place. I should have probably taken a picture of the expressions on their faces when we crossed the road - they were scared and their faces turned pink! Yes, such was the expression I saw when we started to cross the road amidst really fast moving vehicles (on Koramangala inner ring road).

In India, the traffic system (per say) follows the British way - Drive on the left side of the road. But this is just on the books. Many a time, you will witness two, three, four, six wheelers taking on the right side of the road. This happens at many places - sometimes the traffic cop themselves force this kind of a movement - to alleviate a bottleneck at a junction - On-Demand Routing!!

In India, management and business lessons start right from the minute you take a step out of home. Yes, its not a joke. At every signal, you will witness mobile-vendors selling everything - from pens and safety pins to magazines and costly books (I bought a copy of "The Blue Ocean Strategy" in a signal like this in Bangalore). To change from one late to the other, a look into all the three rear-view mirrors is not all enough! It takes a lot of practice and patience to accomplish this task. Fortunately we don't have flying objects (like aeroplanes) landing on the city roads!

The biggest of the monsters on the city roads is the one below! 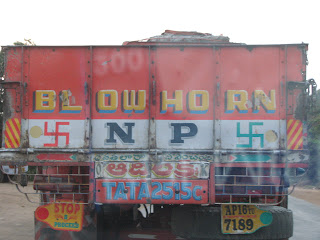 This guy and his siblings - Buses (the BIG-Bs) and the metro-water lorries (esp. in Chennai) are the biggest of the scalawags on the city roads. But nevertheless, its not always the Lion that is dangerous, even a shoal of piranhas are dangerous!! Yes, you guessed it right - I was refering to the auto-rickshaws. They are a real menace on the streets of India - most of the time they never drive on the designated side. There is also a comedian in the tamil film industry whose name is Vivek, who rightly ridicules the driving of these auto-rickshaw drivers by saying - "They show a hand-signal to the left, an electronic-signal to the right, but drive straight!". This is very very true with this noisy bunch.

In Chennai, if you were to travel by an auto-rickshaw, its a test on one's ability to bargain. Yes, you better bargain, else you are taken for the ride of your life!

There is place like the Indian streets to learn sales, marketing, IT, bargaining, and a host of others on a single ride from home to your office (or any destination). Inspite of this, we end up working long hours at office and home.

At Kathipara junction which I pass every day to work, even airplanes fly overhead. So one does get the feeling of them to muscling their way into the traffic chaos, in addition to the city bus, state transport bus, sand lorry, metro water tanker, auto rickshaws, share autos, bicycles, cars, concrete premix trucks etc.,

The joys of art of survival everyday in Singara Chennai !!