The Warm World #1 - An article on Global Warming

Standing at the edge of the flat world is the moment one would never want to see. But thats what we are marching towards. The scientists are certain that our climate is changing. The question that is on everyone's mine is - "What could steer us into this nightmare disaster - and when will this happen"

I've been reading a lot of articles on Global Warming ever since I heard that for the first time. We've seen a lot of movies with Global Warming as the theme - Water World, The Inconvenient Truth are some of them. I was speaking to Ram Viswanathan yesterday, when he recommended the latter movie, and said it was taken well. No doubt, this movie won the Best Documentary award at the Oscars.

The Green House Effect is the reason for the warming of the earth surface. It is the process in which the emission of infrared radiation by an atmosphere warms a planet's surface. A diagramatic representation of the Green House effect is as shown below.. 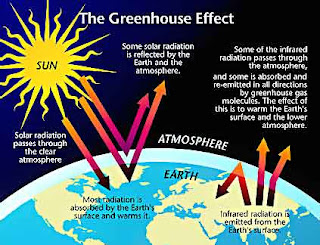 Here is the link to an animation from UCSD (a part of the Earthguide project) that helps us to understand the notion of Global Warming and the Green House Effect.

Stepping on to the main subject of my article, its all about the increase in earth's temperature over the years. If the world's top climate scientists are right, by the end of this century, the earth will have warmed by about 3 degrees Celcius. This Global Warming is largely owed to human actions. But, the future temperatures prediction is largely uncertain. If we are lucky, the actual warming may be only 2 degrees Celcius. If not, it could be as high as 6 degree Celcius.

This uncertainity being due to a non-linearity in the climate system. It is understood that scientists have been observing ice cores which has enabled them to trace temperatures for over 750,000 years back from the present day. Such observations show that dramatic changes has happened rapidly from the ice-age to heat or back, possibly in just a few decades! In short, the changes in temperature observed was not something that happened gradually, but in huge jumps.

This is a worrying fact because it makes the climate system more and more difficult to predict. Instead of the predicted 3 degree Celcius change, it could lead to a sudden climatic disaster - even within the next few decades!

There are a lot of factors that act as a proof to the deteriorating climate. Will be discussing each one of them in my upcoming articles.
Posted by Unknown