I'm splitting my First Marathon experiences to three different parts for the sake of readability. Should you want to download the full article in a PDF format, please click here. This is Part 2 of the three part series. You can read Part 1 here. Would love to hear from you! 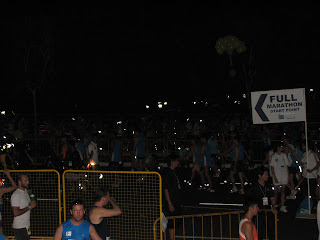 It was next morning (about less than two hours from when I hit the sack) when I went to take a quick wash, and I realized that my whole body was swollen with redness. I thought that it was some weird Singaporean Mosquitoes that did the damn job. I was getting ready that my sister (who slept next to me) woke up with an alarming voice – “Look, my palm is bloodied and I see these 6-7 dead insects here”. This was when I realized that I had just killed one such insect (thinking it was some sort of a cockroach) that was crawling on my sport jerkin a few minutes back. Immediately I realized – “They are those goddamn bedbugs!!!”

Scratching myself like mad, I headed to the cab and asked him to drive down to the address where my friend Hari was staying with his friend. After about 10minutes lost, Hari’s friend called me, only to realize that I had the wrong address! It took us another 5 minutes to get to the right address and pick up Hari. Together we drove down to a place close to the race start point. It was about 5:05am when we stepped out of the car. We headed to the baggage counter to deposit Hari’s kit and then trotted to the start point. My parents, sister and my uncle’s family had promised to be at the starting point by then, but I didn’t see them! I had to hand over the cell phone to them…that was the plan. It was 5:30am already!! I finally spotted them in the crowd after a series of phone call exchanges, and gave them the cell phone and hurried myself through the thronging crowd to the starting point.

The Starting Point…
By then time I was at the start point it was 5:40am, and already 10minutes into the marathon! I felt good physically, but was a bit not OK mentally. I had a mix of feelings in me – Happiness, Anxiety, Anger, and Irritation. I was also worried that I couldn’t hook up Ram’s kid daughter Meera to my sister and parents at the starting point due to this confusion. I started to pace at a decent 9kmph and decided to keep myself well hydrated all through the run. The weather was humid as it had rained badly the previous day. The very fact that I started the race 10 minutes late put me off a bit.

It was about 6:25am, and I was at the 5K point. I sipped half a glass of water and continued with my run. The entire running experience was a bit new to me as it was so crowded with almost one feet (or even less) of shoulder space. I had to run zigzag till about the 10K point when the crowd started to get scattered.

I had missed all my Chennai Runners friends right from the starting point, and I felt a bit lonely. Having someone by your side is always a lot of fun and takes off your attention from what you are doing. Especially during longer runs, a good running buddy helps one to increase pace and stretch the limits.

The Kenyan Spirit…
It was slightly past 13K mark when I saw one of the Kenyan runners (was the winner) running in the opposite direction (in the return loop) about 500meters from where we were running. The feeling was like watching Michael Schumacher drive the F1 lanes when we are driving in the roads of Chennai or Bangalore. The runner’s posture, pace, strides, charisma was so astonishing that I started to pace faster than before without my knowledge!

A Little Encouragement and Company…
I was thoroughly enjoying the run. The water points, the cheering crowd, the school bands playing – every bit of it was so wonderfully organized. There was this point around the 15K point when I started to feel uneasiness in my right knee. I fortunately found a lady offering the pain rub ointment and decided to pause for a bit to get that stuff on both my knees.

This is when I saw this young Singaporean gentleman who had stopped for the want of the pain rub ointment. He was telling out loudly “Why did I have to subject myself to this torture? I’m going to just walk the next 5K and stop. My knees can’t take it.” I heard him and thought “He should complete the marathon! I should probably do something…can I? Let’s see…” I started off a casual conversation with him and we went on to talk about my knee injury. I just told him “If I can run with an ITB on one knee and a knee pain in another, you should definitely run as you are just giving up mentally” After about 5-8minutes, we started to resume running and my this gentleman was now doing good, pacing at 8kmph.

Now my mind got another doubt “Have I run the right direction? Why is that I did not cross any Champion chip scanner? Why is that there were no cameras to take my pictures?” This was around the 20K point, when I saw a point where they had the scanners on both sides of the running path. After a few meters, there was this camera that was probably one of the cameras taking pictures of runners.

Happy to have got past the 21K point, I decided to slow down a little bit and keep going (but not walk). Surprisingly, I never felt an ounce of tiredness! Just the soreness in my right knee was a bit troubling me. I was now running through the ECP (East Coast Park), and it felt like I was in heaven. I saw people walking, jogging, tenting up and lazing around. I saw some shops that rented cycles and rollerblades for those who wanted to enjoy going round on wheels. This was the place I wanted to be!