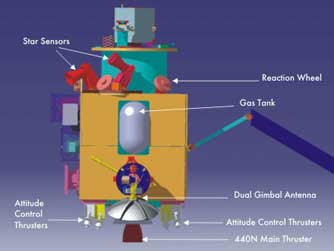 Chandrayaan-1 was successfully launched this morning from ISRO SHAR (Shriharikota Range). This MOON mission is been closely observed by a zillion people across the world for various reasons. Some of the key aspects of the Chandrayaan-1 mission are -
But, to many Indians and young students across the country, this mission will be more closer to heart - It's because, this mission also carries our former President Dr.A.P.J.Abdul Kalam's brainchild in it. Yes, I'm referring to the Moon Impact Probe (MIP). So, what is this MIP all about? Read on... 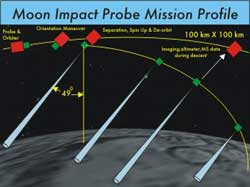 The primary objective of MIP is to demonstrate the technologies required for landing a probe at the desired location on the moon. Through this probe, it is also intended to qualify some of the technologies related to future soft landing missions. This apart, scientific exploration of the moon at close distance is also intended using MIP. The Moon Impact Probe will be ejected from Chandrayaan-1 spacecraft at the earliest opportunity as the spacecraft gets closer to the Moon to hit the lunar surface in a chosen area.

The MIP weighs about 29kgs and consists of the following -
The MIP was totally developed in-house at the Vikram Sarabhai Space Centre of Thiruvananthapuram.

Courtesy: Pictures and knowledge from ISRO.org
Posted by Unknown

Dr. Kalam was more a project manager than a scientist. I would be surprised if he personally contributed to the impact probe?

Yes, it was just his 'idea'. I've not heard or read of his personal contribution (even in the form of providing guidance) to the 'making' of this probe.

But what inspires me about this man is the visionary in him (India 2020 is a good read...of course with the knowledge of his past accomplishments, we know that he has 'been there done that')

Here is an example of Dr. Kalam's project management capabilities, extracted from his autobiography - Wings of Fire:

"I still remember him (Prof. Sarabhai) reviewing the bi-monthly progress of the design project of SLV-3 in June 1970. Presentations on Stages I to IV were arranged. The first three presentations went through smoothly. Mine was the last presentation. I introduced five of my team members who had contributed in various ways to the design. To everybody's surprise, each of them presented his portion of the work with authority and confidence. The presentations were discussed at lengthand the conclusion was that satisfactory progress had been made.

Suddenly, a senior scientist who worked closely with Prof. Sarabhai turned to me and enquired "Well the presentations for your project were made by your team members based on their work. But what did you do for the project?" That was the first time I saw Prof. Sarabhai really annoyed. He told his colleague "You aught to know what project management is all about. We just witnessed an excellent example. It was an outstanding demonstration of teamwork. I have always seen a project leader as an integrator of people and that is precisely what Kalam is."

:-P That's a very good excerpt. It also very well portrays the fact that having a good mentor takes us a long way!(in this case, Prof.Sarabhai)

That reminds me of the example my mentor (an IBM Distinguished Engineer) once gave me (I know he is reading this comment too!) -

"A friend of mine and I were in a meeting with our mentor (an IBM Fellow). The meeting was going well, but my friend had nothing to speak all through the meeting. Suddenly, someone asked him "So, what did you do?" (in the context of the discussion). He answered (looking at his mentor) - "Well, I'm his bag-boy. I did everything he wanted me to do."." That silenced the crowd!

His mentor felt good with that remark, and the others in the meeting didn't have a question (what more? he is a bag-boy to an IBM Fellow!)