Shanghai and the Maglev experience

This is my first posting after my Shanghai travel, and thought it would be good to share the welcome experience I had at Pudong International Airport. I'd reached the airport at about 13:35 Hrs, and waited for my colleague who was arriving from the United States. I'd read a lot about the Shanghai Maglev Train, and hence decided to experience the speed. The Shanghai Maglev Train station is connected to the airport, and we were there in less than 5 minutes. The train operates on one route, which is the Pudong International Airport - Longyang Road link. We took the one-way ticket which costed CNY 50 (INR 267/ USD 6.5). 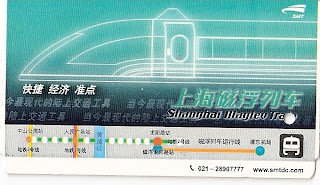 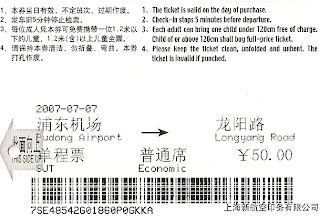 This was one of the most thrilling experience I've had so far. We were allowed to enter the track area only after the train arrived at the station. The station had a railing that prevented the movement of people anywhere near the tracks. The train looked like a mini Boeing jet to me. We boarded the train, and in less than a minute, we heard the bell and the doors closed. The train had one more uniqueness - it had a digital tachometer displayed inside. I didn't even realize the speed at which the train was moving, until I saw the tachometer. 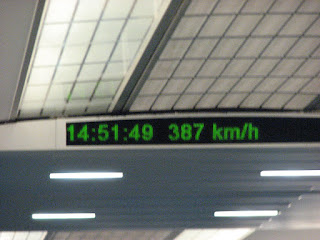 But for the tachometer, I'd never have realized the train speed. It was such a smooth ride, that it felt like traveling in a jet.

If you happen to go to Shanghai, make it a point to take this wonder machine from PIA to Longyang Road, and then take a cab from Longyang Road station.
Posted by Unknown

Email ThisBlogThis!Share to TwitterShare to FacebookShare to Pinterest
Labels: Travel