Having passively observed Twitter grow from a mere status update tool to a buzz, I must admit that the creation of Twitter has been a truly open creation. Twitter has given birth to a whole new set of business models and also tools and platforms. 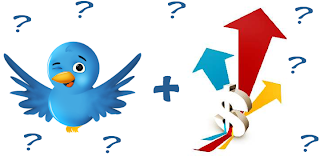 Having said that, here is something that I'd like to share with you.....something that I've been thinking about for quiet sometime now. With the Twitter-effect being as powerful as an avalanche, how can it really affect world markets? Here is a case - How would it be if a successful stock market trader with thousands of Twitter followers tweeted about him buying a stock?

Could that potentially trigger all his followers to buy loads of the same stock, thereby creating an artificial demand - everything in just a few minutes!?!?!! This can potentially help a lot of people make money while driving the stock market highly volatile. Well, this is just my thought. What say you? Given a chance, would you do something like this? On the other side, do you think something like this can help the world economy grow?
Posted by Unknown

Twitter is cell phone friendly which makes it widely popular.Makes me wonder if Google Buzz is not far behind.