Running in Chennai - When, What, Where, How? 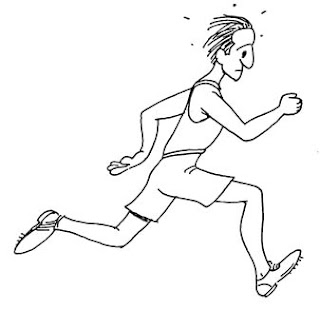 Many people have asked me about running in the city of Chennai, and I've tried to give them the right information. In this article, I thought of putting down my thoughts on this subject - I hope it will be useful for many in the days to come.

THE CITY OF CHENNAI

Firstly, I'd like to give a little information about the city of Chennai. Chennai is located in the state of Tamilnadu in India. Chennai is a pretty big city and is one of the metros in India. The climate is more tropical and the temperatures average at about 30 degrees Celsius annually. The humidity averages at about 70% and the day gets pretty busy by about 7:30AM. The traffic is pretty high during the day time with the peak hours being 8:30AM-11:30AM and 5:00PM-7:30PM. The atmosphere gets pretty polluted...especially during the peak hours.

The roads in the city are pretty wide in most places, but you are sure to bump into some pot-holes in many roads. The city enjoys summer from early-March to mid-August in reality with the peak summer falling somtime in the second half of May. Temperatures during summer can average at 37 degrees Celsius, and can go as high as 44 degrees Celsius during the peak season (second half of May). The city enjoys rainfall from mid-September to early-December (or late-November), and the roads get pretty much flooded with puddles of water. The winter season is during the months of December to early-February, when the temperatures can fall as low as 20 degrees Celsius.

Chennai is a city that loves sports of all kind. The city has one of the best cricket teams with equal excellence in the sports of football, hockey, kabaddi and field atheletics. Running has been a much appreciated sport with a big number of atheletes into short distance running. There are big organizations like the YMCA and SDAT which have extended unrelenting support to this sport through the years. Chennai Runners is the biggest running club in the city, and with more than 600+ members, this club has been doing extensive running programs ever since 2006. I strongly urge you to visit www.chennairunners.com to know more.

As you would have guessed by now, Chennai is pretty tropical and humid most part of the year. Should you want to run in the city, I strongly urge you to carry a bottle of water or a fuel-belt. With the sun up and shining by 7AM, I strongly urge you to do early morning runs. Ideal time to start your run will be at about 4:30AM or 5:00AM, if you plan to do longer distances (>10-15kms). Also, use a good non-greasy sun block (with SPF of 30+) is advisable to avoid su burns. Chennai also has a lot of stray dogs, but with an increasing number of runners hitting the asphalt, these dogs seem to have got used to seeing people run and hence don't get into your way!

In terms of the apparel, a good running tee that breaths is something that will keep you cool and comfortable during your run. A dry-fit tee is what I would strongly recommend. With the city traffic being high, it's a good practice to run on the right side of the two-way roads...against the traffic. Should you want to find out good running routes, do visit www.chennairunners.com. Also, if you are looking for a group to run with, you should join the Chennai Runners' Google Group and get updates on our regular runs!

this must be you:

Thanks Balu!! Yes, it's me! If possible, can you email me the original resolution pic when you get time? Thanks again..

Sir, I am new to this city. I am located at Mogappair .Could you tell me any playground or academy to carry out my morning fitness run close to these areas.

Do join Chennai Runners by joining the Google Group (http://groups.google.com/group/chennairunners). There are runs happening in Annanagar every day, and the announcements are made on this group. Do signup and enjoy running!