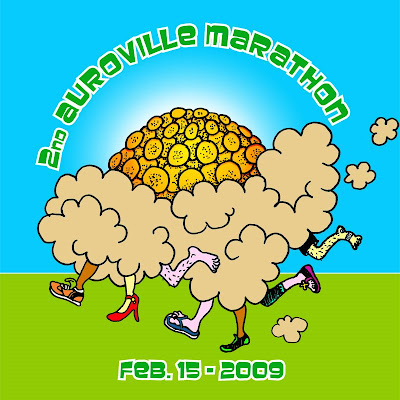 I've been doing lesser and lighter runs ever since I did my Singapore marathon in December last year. And now, I've planned to kick-off this year's runs at the second Auroville Marathon that's happening on the 15th February 2008! I'm running a half marathon at Auroville this time too. Though there are multiple reasons for one to run the Auroville marathon, to me, its more to do with the place itself. The serene and pristine surroundings in Auroville is something that has to be experienced. The place (and its people) had created a magical spell in me last year, that I decided to start my 2009 runs at Auroville.

There are many things special about the Auroville marathon. But personally, I enjoyed the unique pasta party, the fruits and fresh lime juices on the run, the ride to Auroville from Chennai with my Chennai Runners friends and the awesome foot massage after the run. But this time, I have been pleasantly surprised by a very unique aspect of Auroville marathon - I gotto "pick-n-choose" my BIB number!!! No, I'm not kidding. Thanks to my Chennai Runners friend Balaji, I got a VIP privelege to choose my BIB number. Balaji has been based out of Auroville for sometime now, and has been assisting Chandresh with the organization of this marathon. Thanks, Balaji!

Chandresh, who has been the key organizer of the Auroville marathon, had done a tremendous job last year. The organization was by far the best I've seen for a first-marathon! Chandresh is a long distance runner and a marathoner himself, and I'm sure he put himself in the runners' shoes before chalking out the route and organizing the run. Chandresh - I'm looking forward to a wonderful time at Auroville!

Having been running very scantily since my Singapore marathon, I'm looking to take the Auroville one pretty easy with the focus just being the completion (in a decent timing). I'm going to be running for Asha this time too. So, do contriute to my run and join hands in educating several underprivileged children in this country.
Posted by Unknown

I ran the race too and have penned down my experience at http://thewriteperspective.wordpress.com/

Do have a look!