MIP's Tryst with the Moon - ISRO does India Proud! 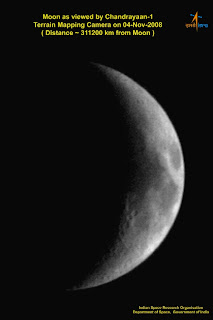 When many young minds in India were enjoying the Children's Day celebrations, ISRO and the nation had another reason to celebrate - The successful placing of our Tricolor flag on the Moon! Yes, from now on, India has two reasons to remember November 14th. We are the 4th country in the world (after US, Japan and Russia) to have implanted the national flag on the Moon!

The Moon Impact Probe (MIP), one of Chandrayaan-1's 11 payloads hit the Lunar surface near the Moon's South Polar region at 20:31Hrs IST today. Many may see the coincidence with Pandit Jawaharlal Nehru's birthday and this great event (as it was only when he was India's Prime Minister that India's space programme was launched). But I, on the contrary, see a different coincidence. MIP was Dr.A.P.J.Abdul Kalam's brainchild, and in today's world, he is an inspiration to children across the country than anyone else.

Here is how ISRO detailed the series of steps that MIP did in the 25 minute journey to the Lunar Surface (after separating from Chandrayaan-1 at 20:06 Hrs IST) -

... a series of automatic operations that began with the firing of its spin up rockets after achieving a safe distance of separation from Chandrayaan-1. Later, the probe slowed down with the firing of its retro rocket and started its rapid descent towards the moon’s surface. Information from the its instruments was radioed to Chandrayaan-1 by MIP. The spacecraft recorded this in its onboard memory for later readout. Finally, the probe had a hard landing on the lunar surface that terminated its functioning.

To read a first-hand report on this spectacular space mission, go to ISRO's very own press release here. This is just one of the first steps of Chandrayaan-1. But the point to be noted is that MIP is totally indigenous to India (developed by Vikram Sarabhai Space Centre of Thiruvananthapuram). So, essentially it's the first completely-Indian object to land on the Moon!

Do stay tuned to www.ISRO.org for continuous updates!

Courtesy: Pictures and knowledge from ISRO.org
Posted by Unknown